Throughout the region, Ukrainian communities make ‘pysanky’, ornately decorated Easter eggs whose designs are rich in symbols of salvation and new life.

Drawn in beeswax with a stylus called a “kistka” and colored with aniline dyes, psyanky has taken on even deeper meaning this year, with many organizations holding pysanky rallies to raise awareness and help Ukraine. .

On April 1, Manor College in Jenkintown hosted “Make a Pysanky for Ukraine Day,” led by Chrystyna Prokopovich, curator of the school’s Center for Ukrainian Heritage Studies, whose museum contains more than 200 pysanky, the mostly made by members of the college community. .

Prokopovich said that according to the ancient history of custom, psyanky (plural of “psyanka”) are a force to contain evil.

If no psyanky is created, she says, “he’s completely free and does whatever he wants.”

The caption evokes the current horror of the latest Russian invasion of Ukraine, which began on February 24 and has since left thousands dead and more than 10 million displaced.

Chrystyna Prokopovich, curator of the Center for Ukrainian Heritage Studies at Manor College, guided participants through a “Pysanky for Ukraine” event on April 1. (Manor College)

In recent days, horrifying discoveries have reported mass graves and summary executions, as well as survivors’ accounts of torture and rape at the hands of Russian troops.

An April 12 report by the Organization for Security and Cooperation in Europe revealed “clear patterns of violations of international humanitarian law by Russian forces” in Ukraine.

Amid such suffering, the “meditative” process of creating pysanky invites participants to reflect on kindness and renewal, Prokopovich said.

Pysanky makers traditionally made the sign of the cross and whispered “God help me” before their work to ensure that “the deep religious meanings” of the designs would “come to life”, she noted.

“There’s one called the ’40 triangles,’ and for every triangle you said a prayer,'” Prokopovich said.

The craft has pre-Christian roots, she says, but has always used symbols that affirm life and prosperity.

“Pysanky is thousands of years old and was used to welcome spring,” Prokopovich said. “Once it was incorporated into Easter customs, some symbols changed. What was once the four corners of the earth became the cross. The grapes, which (represented) a good harvest, became the growing church.

Each region of Ukraine “had its own influence” on crafts, she said – but under Soviet communism, pysanky, along with other Ukrainian folk arts and the Ukrainian language itself, were removed.

“It was one of the arts we all grew up with…but it was very frowned upon by the communist government,” Prokopovich said. “So you couldn’t do pysanky and brag about it in school, that’s for sure. And you couldn’t go to church,” she added, noting the Soviet ban on Ukrainian Greek Catholic Church.

But pysanky — whose name comes from the Ukrainian word for “writing” — sends “a message” of encouragement, Prokopovich said.

“In fact, you write… with wax; you write a Hallmark card for someone,” she said. “Pysanky was a kind of dying art in Ukraine, but it’s alive and well again.” 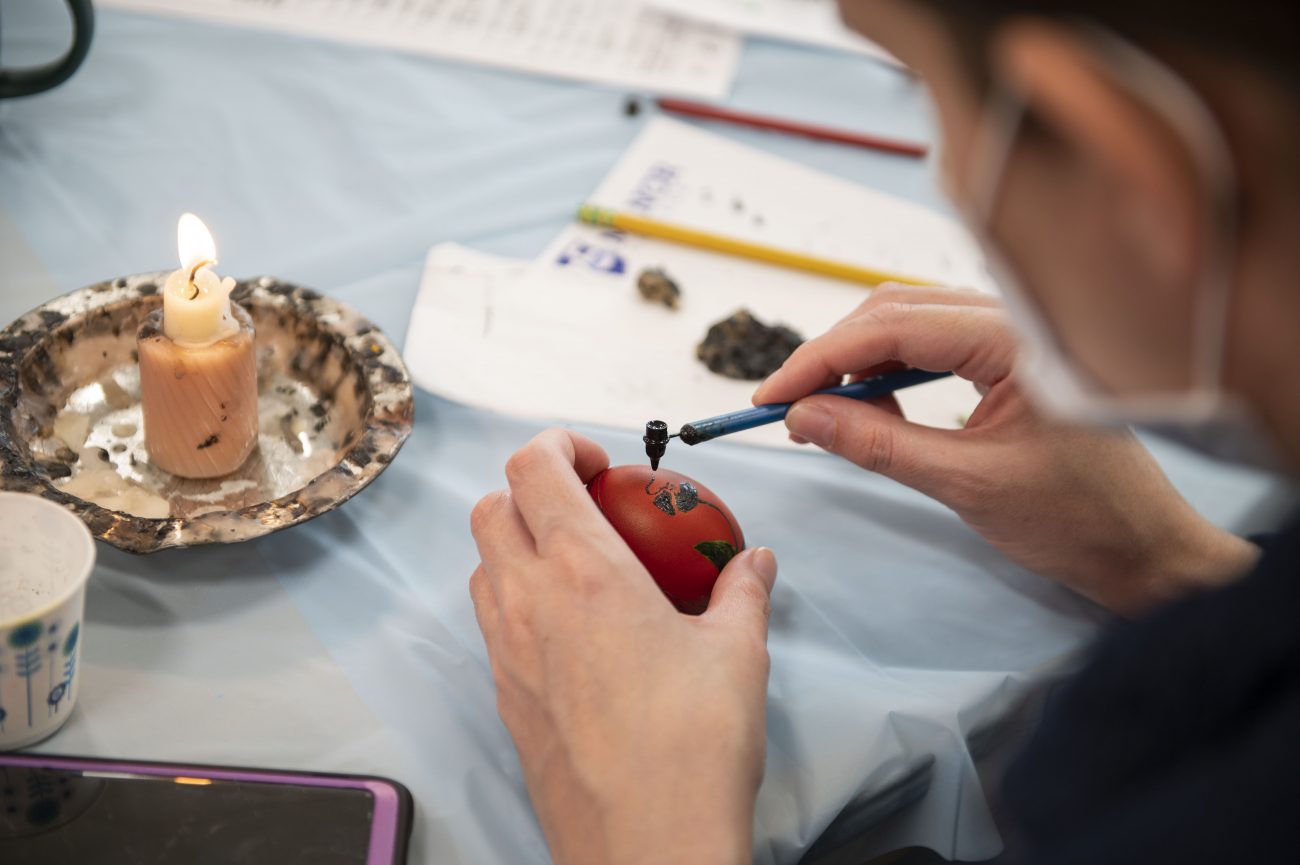 A woman uses a stylus called a “kistka” to draw wax patterns on an egg as part of Manor College’s “Make a Pysanky for Ukraine” event on April 1. (Manor College)