Altar bread is seen on the patens before Mass Oct. 8, 2021 at the Renasant Convention Center in Memphis, Tennessee, during the Diocesan Eucharistic Congress. (CNS/Karen Pulfer Focht)

A new consecration of the Eucharist is crucial, as anything repeated weekly, or daily for some, can become routine with an accompanying loss of meaning.

The Eucharist, source and summit of Catholic spiritual life, is the most significant sacrament of the Church. Before becoming a Catholic, I sang in the gospel choir of a Catholic church. Curious to know why anyone would want to be Catholic, I asked one of my fellow baritone singers, “Why are you Catholic?” His response, confusing then but clearer now, was: “It’s all about the Eucharist.

Two years later I became a Catholic, and so began my ever-growing understanding of the Eucharist. Twenty-four years after my confirmation, I refer to the sentiment of Saint Teresa of Ávila, who wrote 500 years ago: “O wealth of the poor, how marvelously you can sustain souls, gradually revealing to them your great riches and not allowing yourself not to see them all at once! Since the time of that great vision, I have never seen such great majesty hidden in so small a thing as the host, without marveling at your great wisdom. Each reception of the Eucharist expands my vision, my heart and my vocation.

I therefore applaud the Eucharistic renewal of the bishops. However, I am suspicious of the intention of the bishops. These are many of the same people who, after supporting a President (Donald Trump) whose racism and misogyny were appalling, immediately pounced on a Catholic President (Joe Biden) with threats of a Eucharistic ban. Also, recently the Archbishop of San Francisco Salvatore Cordileone ordered that House Speaker Nancy Pelosi be barred from receiving the Eucharist. Cordileone’s letter Remarks:

I hereby notify you that you are not to present yourself for Holy Communion and, if you do, you are not to be admitted to Holy Communion, until you have publicly repudiated your plea for legitimacy of abortion, confessed and received absolution for this grave sin in the Sacrament of Penance.

I am catholic, I don’t “believe” in abortion, but I believe that we must work to build a society where abortions are unnecessary, not illegal. I also believe that our society’s approach to abortion reflects a male-centered lack of compassion for women. I believe that, as one person told me, “if men got pregnant, abortions would be as accessible as an ATM”. This makes you think that the states that have banned or are most likely to ban abortion are also those with the weakest safety net for women and children. Our over-focus on making abortions illegal obscures our view of the broader social and economic conditions that diminish the lives of women and children.

Fortunately, the diversions of the Eucharist cannot dilute its power. This liturgical year, I attended an Advent retreat led by Fr. Peter Bosque, a retired priest from the Diocese of San Diego. He reminded us that, as Saint Augustine said, in the Eucharist we place ourselves on the altar. Augustine’s sentiment echoes that of Romans 12:1-2: “I beseech you therefore, my brothers and sisters, by the mercies of God, to offer up your bodies as a living sacrifice.” Following this prayer is a discussion of how our various gifts come together as we become the body of Christ. Thus, “your bodies” is not about individuals, but about the collective. 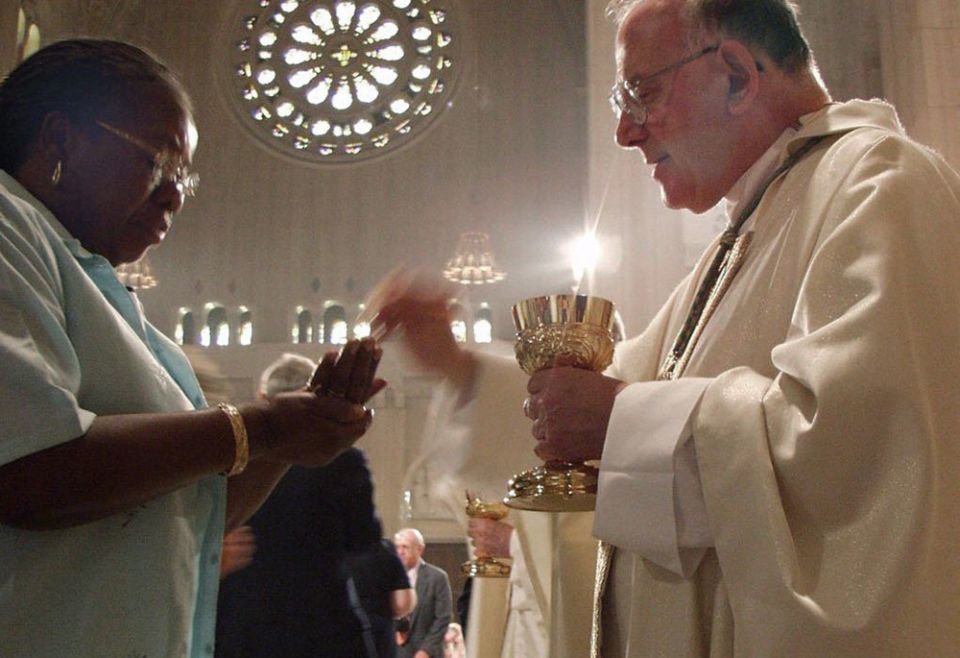 In this 2002 file photo, a woman receives communion during a special mass marking the first Eucharistic convention of the Knights of Columbus at the Basilica of the National Shrine of the Immaculate Conception in Washington. On June 16, 2022, the feast of Corpus Christi, the triennial eucharistic revival of the American bishops begins. It culminates with a Eucharistic Congress in 2024 in Indianapolis. (CNS Photo by Andy Carruthers, Catholic Standard)

The Eucharist is not magic. The Eucharist is our realization that Christ was broken for our integrity. And “our” is not for individual benefit, but for us to come together with our brothers and sisters to form and live as the body of Christ on earth. So, like Christ, we are broken and given for the life of the world. The Eucharistic Prayer Book “Bread of Life” contains the following from Oblate Fr. Ron Rolheiser: “More than bread and wine, we the people are destined to be changed, to be transubstantiated. The Eucharist, as a sacrifice, asks us to become the bread of rupture and the chalice of vulnerability.

Additionally, Eucharistic Prayer 4 asks God “to make us an eternal offering to you…so that we may no longer live for ourselves…but for him…to complete his work on earth.” This prayer sheds light on what happens in the Eucharist. We are the offering, we live like him, together we complete his work on earth. This work is not judgment, division or exclusion, but love, mercy and justice. Bosque reminded us that the Mass is not for us, “but for the world, and that it is nourishment in our journey to become love”.

I hope our rebirth from the Eucharist is to become the body of Christ, with all the beautiful implications that come with it. The Eucharist is not for worthy, special, virtuous or qualified people, nor a tool to affirm or deny a narrow political agenda. It is much more, it is our profound encounter with the incomprehensible love of God, an encounter which calls us to love in return. This love is not abstract, for it is specific enough to address the poor and the excluded.

The Eucharist is not for worthy, special, virtuous or qualified people, nor a tool to affirm or deny a narrow political agenda. It is much more, it is our profound encounter with the incomprehensible love of God, an encounter which calls us to love in return.

I refer to Goffredo Boselli The spiritual meaning of the liturgy: school of prayer, source of lifewhich includes the chapter “Liturgy and love of the poor”.

He goes on to say, “In a culture marked by individualism, competition, self-assertion at all costs even at the expense of others and against others, it is difficult to be church, to be truly community. Only from the Eucharist, from the prophetic gesture of the breaking of bread, can the Christian communities of the West renew their awareness that the Church cannot be the body of Christ where Christians are unable to turn away selfishness and refuse to share their goods with the poor.

The Eucharist has riches that can never be exhausted. It empowers an individual so molded in Christ that “not I live, but Christ lives in me.” It also recreates a diverse, fragmented, and imperfect community of believers into a loving, righteous body of Christ in the world.

Jesus said two things about the future in the Gospel of John: first, we will do greater works than he; and secondly, that he has many other things to tell us. The Eucharist fulfills these promises. I hope the Eucharistic revival will be an opportunity to grasp and live in the love and community made possible by our sharing of this sacred mystery.

Enter your email address to receive free newsletters from NCR.