Richard Grant, longtime chairman of the Daniel Murphy Foundation and a renowned figure in Catholic philanthropy in Los Angeles and nationally, died Aug. 10 after a long illness. He was 82 years old.

Known for his modest character and kindness, Grant held several key leadership positions at the Murphy Foundation for 50 years until his retirement in 2020. Under his leadership as president, the foundation increasingly turned its attention toward supporting Catholic education in Los Angeles, with a special focus on inner-city schools.

“Through his work leading the Dan Murphy Foundation and other philanthropic organizations, he has dedicated his life to alleviating the suffering of the poor, sick and vulnerable in the most humble way,” said David Fuhrman, who succeeded Grant as president of the foundation in 2020.

A well-known example is his successful campaign to save Cathedral High School near downtown Los Angeles from closure in the 1980s.

“It took more than a foundation, it took more than money to make it work,” Grant recalled in a Angelus Profile earlier this year. “You need a team of committed people. It’s about passing the ball and allowing people to help.

After his retirement, Bishop José H. Gomez told Angelus that “for decades Richard has been the driving force behind so many good, hopeful and beautiful things in the Archdiocese of Los Angeles.”

On August 2, just a week before his death, Bishop Gomez joined local members of the Order of Malta at a prayer service at Our Lady of the Angels Cathedral held to honor Richard and his marries Mary. The service included worship of the relics of Saint Bernadetterecognizing Richard’s deep devotion to Our Lady of Lourdes, who appeared to the saint in 1858.

Friends of Richard and Maria Grant, including local members of the Order of Malta and the Carmelite Sisters of the Sacred Heart of Los Angeles, at an August 2 prayer service with the relics of Saint Bernadette. The Grants were able to participate in the service via the livestream. (Scott Vick)

In a video message delivered during the service, the Archbishop expressed his gratitude for the “couple’s kindness and love over all these years.”

“I am grateful every day, more than you can imagine, for your wisdom and guidance. And above all, for your friendship,” he added.

Although the Grants were unable to attend the service, it was broadcast live so they could participate from home. Maria said the visit to the relic and the prayer service were touching for Richard, who had made fifteen pilgrimages to the Shrine of Our Lady of Lourdes in France during his life.

Rowena Itchon met Grant while accompanying her sister Ruby, who was suffering from illness at the time, on one such pilgrimage to Lourdes in 2019. She said she was surprised to see her normally reserved sister “completely at comfortable” with Grant during the pilgrimage. A few days before her death, Grant texted Rowena to tell her he was praying for Ruby, who has since passed away.

“He was everyone’s friend and was so generous with his time,” said Itchon, who was among those praying for Grant at the Aug. 2 prayer service.

The Daniel Murphy Foundation was founded in 1957 by Daniel and Bernardine Donohue. Grant’s father served as the foundation’s first treasurer, and when Bernardine died in 1968, Grant became a member of the board of trustees. He eventually succeeded his father as treasurer before becoming general manager and, in 2008, president. 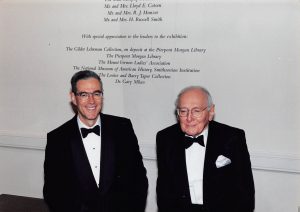 Richard Grant with his predecessor Sir Daniel J. Donohue, who served as Chairman of the Dan Murphy Foundation for over 40 years.

Fuhrman noted that Grant was the last of the foundation’s employees and trustees with direct family ties to Daniel Murphy and Bernardine.

In his final interview with Angelus, Grant described his father as “my best teacher”.

“He looked at things, saw what needed to be done and then said, ‘Let’s do it.’ He was a wonderful example of getting out there and doing things. It was always part of my life growing up.

Furhman told Angelus that Grant will be remembered for, among other things, shaping the foundation’s mission and building “a lasting business dedicated to a vibrant Catholic community in the Archdiocese of Los Angeles.”

“People who observe Richard and who have experienced his powerful combination of grace and modesty often proclaim that he is a ‘modern-day saint,'” he said.