MADRID (JTA) — Beneath a sprawling 14th-century building with moss-crested terrace walls and interiors painted in garish splashes of purple and yellow lie what may be the remains of Spain’s second-largest synagogue in medieval times.

The 7,500 square foot estate, currently being explored by researchers and archaeologists, is tucked away down a narrow lane in Utrera, a small town in the province of Seville in southwestern Spain. It is covered in geraniums popular in the city’s historic Jewish quarter.

The property had a long and multifaceted history as a hospital, dating back to the 17th century; a Catholic chapel; an orphanage, and more recently, in the 20th century, a school, restaurant and cocktail bar.

But the city council bought the now-derelict property in 2018 and launched an archaeological dig project last February, hoping to uncover a synagogue that has been pushed underground over centuries.

View of a street in the Jewish quarter of Utrera. (Town Hall of Utrera)

The goal is not only to preserve and promote Jewish history and culture, which the country’s government has prioritized in recent years in order to to rectify its dark history of the Inquisition.

As COVID-19 continues to harm tourism around the world, Spain seeks to stay one of the most visited countries on the planet. And ancient synagogues can attract tourists, especially for small towns that lack them.

The discovery of the synagogue “would put our city on the world map, alongside cities like Seville”, said José María Villalobos, mayor of Utrera and main supporter of the project. “It would be a powerful draw for Utrera as a major tourist destination.”

Utrera is far from alone in exploiting its Jewish past. Long before the pandemic, government and private interests at the regional and municipal levels attempted to unearth, restore and exhibit Jewish heritage sites from the Middle Ages.

“In terms of cultural heritage, Spain has undergone a huge transformation since the late 1980s, with an upsurge in archaeological interventions associated with the boom in the construction industry,” said Professor Jorge A. Eiroa. of medieval history at the University of Murcia. He explained that synagogues often appear when land is dug up during construction.

But after 1492 – the year the Jews were expelled from Spain by the Inquisition – most were abandoned, and many were built or subsumed into other buildings. Some of the few prominent ones still intact today were reused in Roman Catholic churches, such as El Tránsito and Santa Maria la Blanca in Toledo, the Cordoba Synagogue and Corpus Christi in Segovia. (Some of these, ironically, have recently reverted to Jewish-themed entities, as museums and cultural centers that teach Spanish Jewish history.)

Global Stories: Want more international stories in your inbox? Sign up for JTA’s Around the World newsletter.

Many synagogues across Europe have been transformed over the centuries. In 2018, a British organization called the Foundation for Jewish Heritage launched an interactive map which identifies and categorizes them, showing how their functions have changed – some are now shops, restaurants, sports facilities and even funeral homes.

However, many Jewish worship sites scattered throughout the Spanish peninsula are hidden underground without any documented evidence of their existence.

“When a synagogue is converted into a church, all the Jewish remains are quickly removed,” Eiroa said, explaining the difficulties of finding ancient synagogues. “If we are lucky, the Torah ark is transformed into a small altar, as in the case of Cordoba”, and thus preserved.

Miguel Ángel de Dios, one of the archaeologists working on the Utrera project, is convinced that he will discover an underground synagogue. His team is looking for Jewish religious “traits” – including clues that show whether the site was divided into male and female sections.

“We still have no idea whether or not the synagogue is there and what condition it is in. But, if we find it, we believe that a mikvah, or ritual bath, should be located outside the synagogue. prayer hall, as well as some sort of building for the women’s gallery,” de Dios told the Jewish Telegraphic Agency. “It may not have been preserved, but we can certainly look for traces of a kind of distinction between men and women.

About 270 km to the northeast, in the ancient city of Úbeda, stands another once unknown synagogue with a medieval mikveh, or ritual bath, which gives it a nickname: the Water Synagogue.

Buried beneath the plinth of surrounding townhouses, the synagogue remained untouched until it was accidentally discovered in 2007. Its discovery stunned the owners of the property, who were developing tourist apartments and a parking lot. 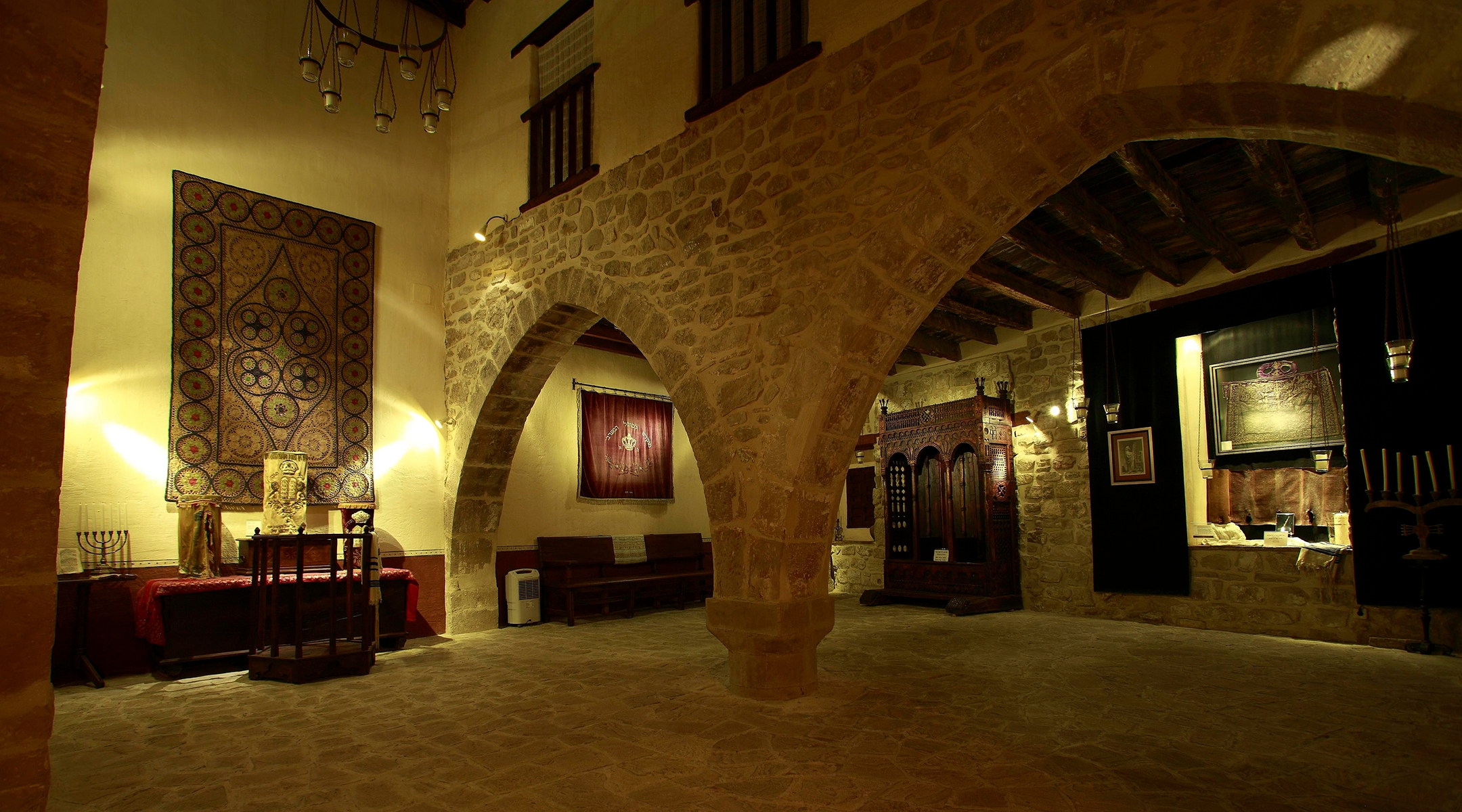 A view of the main hall of the Synagogue of Water in Úbeda, Spain. (Andrea Pezzini)

The main owner, Fernando Crespo, quickly understood the cultural importance of the site – and its tourism potential – and halted construction projects. After three years of excavations and restorations, the synagogue opened to the public as a museum in 2010.

“It was a big surprise for all of us to find this magical place – a striking discovery, a journey through history,” said Andrea Pezzini, manager of Artificis, a tourism company that now manages the synagogue.

The Water Synagogue is divided into seven interconnected chambers, including the well-preserved mikveh. The swimming pool, located on the lowest level, has been carved out of natural rock and is illuminated by picturesque rays of natural light, giving it a mystical quality. For centuries, natural water from a well has flowed there, being renewed every day. Scholars believe there is only one other record of a similar natural mikvah in Spain, in the small Catalan town of Besalú. 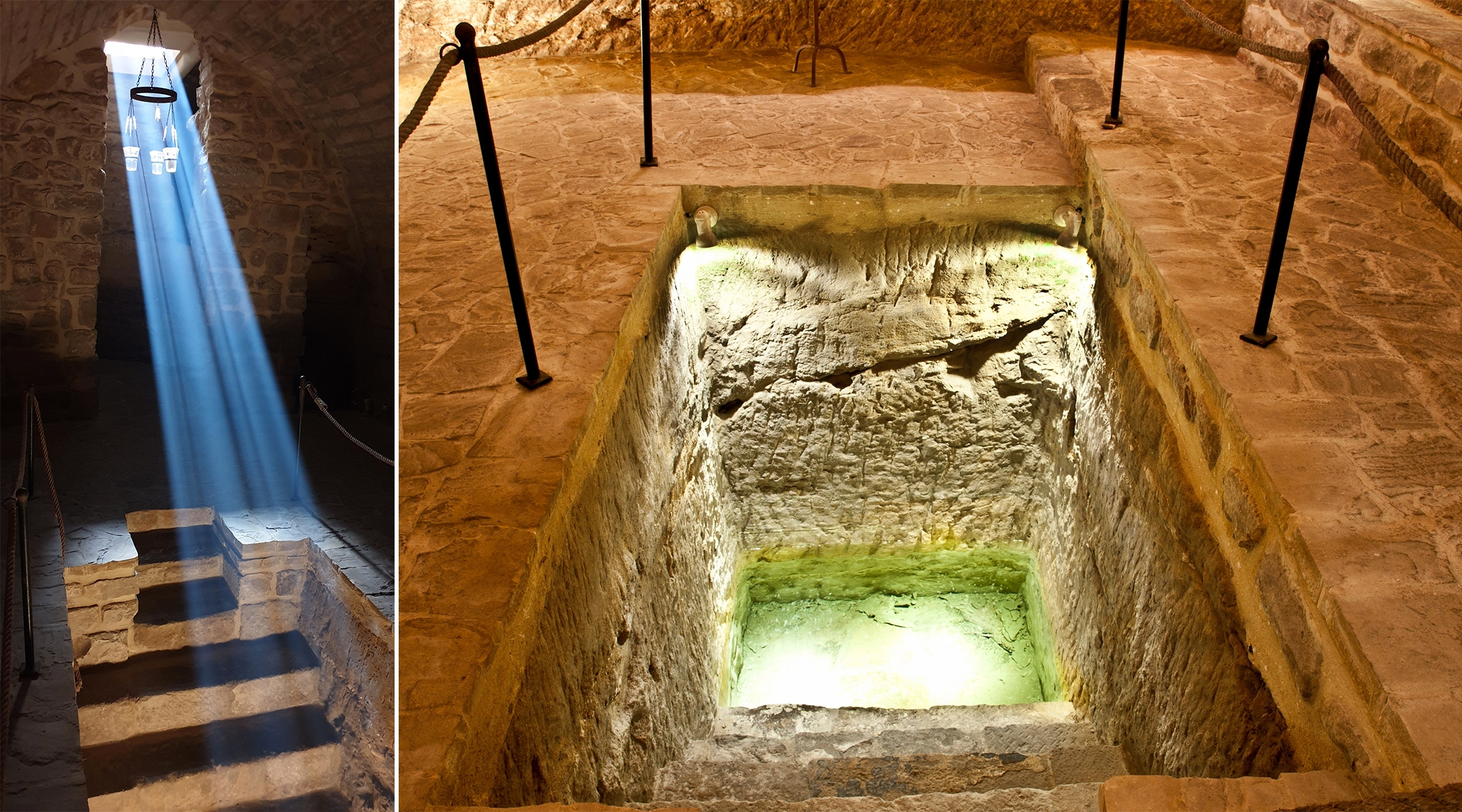 Photos of the mikveh at the Water Synagogue in Úbeda, Spain. (Joaquin Fruiz)

Before COVID, the Water Synagogue had about 27,000 visitors per year; in the first pandemic year, that number fell to 10,000.

Lorca Synagogue in Lorca, located in the southwest region of Murcia, was discovered in 2003 during the construction of a hotel. But it wasn’t discovered underground – it was tucked away in a medieval fortress.

The castle, which extends throughout the historic quarter of Alcalá, existed between the 9th and 15th centuries. The synagogue is the only one known to have been found with an intact bimah, the raised platform where services are held and the Torah ark.

“These ritual remains are kept in synagogues which become uninhabited and unoccupied,” Eiroa said.

Archaeologists found more than 2,600 glass fragments, which they used to piece together 27 lamps once used to light the temple. Today they are on display in the city’s Archaeological Museum, alongside other hanukkiot fragments, ceramics, buckles, rings and coins, which teach visitors about the daily life of the Jews of Lorca and on how they celebrated their festivities over 500 years ago. 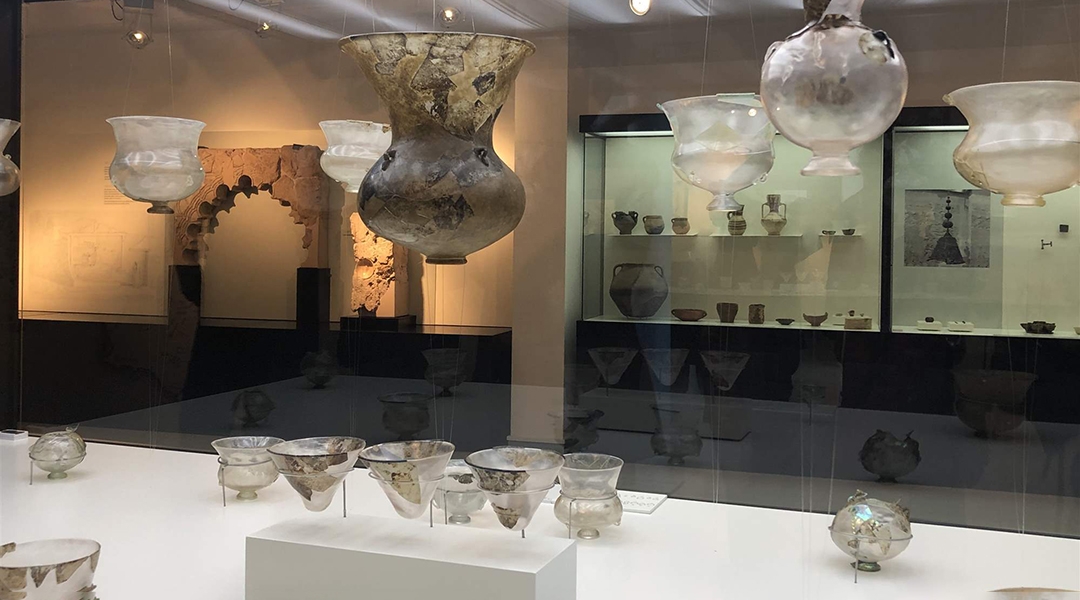 The lamps found during the excavations of the Synagogue of Lorca are exhibited in the Municipal Archaeological Museum of Lorca. (Museo Archeologico Municipal de Lorca)

Other recently discovered synagogues include the Guadalajara Synagogue of Molina de Aragón, which is just a pile of ruins for now, and the Synagogue of Teruel de Híjar. In the latter case, the rehabilitation works were completed in early 2021 but a date for opening to the public has not been determined.

Eiroa said the growing focus on reclaiming Jewish heritage sites will only continue to increase as municipalities continue to capitalize on their ties to Sepharad as its Jews refer to Spain in Hebrew.

“It is quite evident that Sepharad’s past has always been a very attractive and captivating asset and, from a heritage point of view, very attractive for municipal councils and autonomous communities,” he said.