On Saturday, volunteers carried on a 45-year-old tradition, plastering the walls and generally cleaning the grounds of the historic old church of San Isidro.

Corrales Historical Society president John McCandless said that at the height of the activity, about 25 people, from children to “elders,” showed up from Corrales, Rio Rancho and Albuquerque to help.

“It’s almost symbolic,” he said of the work.

He has the feeling that it maintains the memories of the previous days.

A professional has to do the exterior adobe plastering of the church because of a federal grant, as he understands. However, volunteers can apply the mud to the church annex and the courtyard wall. 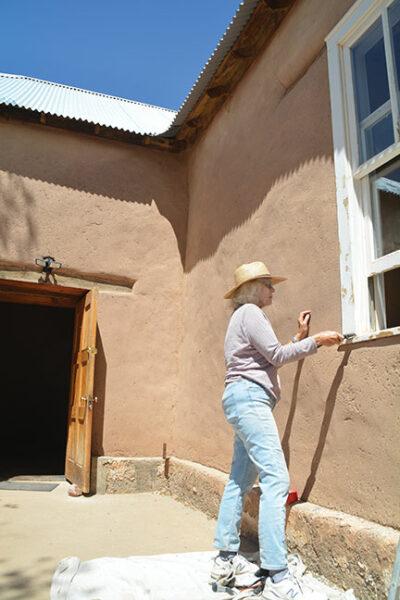 Mud Day, named this year “Mud, Sweat and Cheers”, also includes other work, such as weeding the land and painting window frames.

Corrales couple Maryann Wasiolek and Jon Sandor donated their time on Saturday. Scraping peeling paint from window frames, Wasiolek said they live in the community and love it, so they’re trying to give back.

The church was built in 1868 to replace an earlier chapel washed away by a flood, McCandless said. One or two of the neighboring owners donated land for the replacement, and the builders reused the larger timbers from the destroyed church.

In 1930, McCandless said, the building was upgraded from a flat roof to a pitched roof and from dirt floors to wood. In the early 1960s the Catholic Diocese desecrated it and built a new chapel, still in use today, on Corrales Road.

Then, in 1973, McCandless continues, a couple bought the historic house next door and wanted the church as well. The diocese did not want the building to be privately owned, so the Corrales Historical Society formed to raise funds for a down payment and took out a loan to purchase the church.

Around this time, volunteers decided to remove the decaying stucco and replace it with real adobe mud. That move necessitated the annual mudding, as rain and snow wear down the adobe, McCandless said.

Eventually, the village of Corrales repaid the balance of the loan and took possession of the old church. The historical society is still responsible for maintenance and uses the building for events and archive storage.

McCandless said volunteers did almost all of the church’s rehabilitation work.