Gad Elmaleh, France’s most popular Jewish comedian, who has often referenced his Jewish identity on stage, shocked Jews in France and his fans around the world by announcing that he was converting to Catholicism. Think about how Americans would feel if Jerry Seinfeld – or Barbra Streisand – converted to Catholicism.

Gad (a Hebrew name, one of the twelve sons of Patriarch Jacob) was born in Casablanca to traditional Moroccan Jewish parents. He attended Jewish school. At the age of 17, he emigrated with his family to Canada, then settled in Paris. He was voted “the funniest man in France” and was nominated for the French equivalent of an Oscar. His comedy sketches in English are popular on Netflix.

So why did he convert to Catholicism?

Could it be the influence of his three Catholic romantic partners, including Charlotte Marie Casiraghi, a princess of the royal family of Monaco? Although he had children with two of these women, he never married.

Could it be a rebellion? In an interview on French television, he told how, at the age of six in Casablanca, he, together with his father and sister, passed in front of a church. His father said to him, “Do you see this building? You do not enter it. Gad says he was “tempted” by the forbidden. He and his sister then flew into the building. The statue of the Virgin Mary “defeated” him. He was also impressed by the calm and “calmness” of the cathedral, contrasting with the noisy prayers of a Moroccan synagogue.

Could it be psychological, acting on his complicated relationship with his own mother? When the TV interviewer asked Gad, “What about your mother?” he replied, “Everything.”

Gad’s parents are horrified by his decision. Moroccan Jews are descendants of Spanish Jews who, faced with the expulsion edict of 1492, chose to renounce all their possessions and risk death at the hands of pirates or unscrupulous sea captains by leaving the Spain, rather than convert to Christianity.

Gad and his parents

Gad asked his parents to appear in a movie he was shooting about a Jew who converts to Christianity. In front of the camera, he revealed to them that he was this Jew. Her mother extemporaneously exclaimed, “’You change your God, so you might as well change your parents.’

All speculation aside, Gad himself said his decision was motivated by spiritual reasons.

Gad, raised in a traditional Jewish home, never realized he could have such a personal and loving relationship with the God of Judaism.

He explained that when he first saw this statue in the church at the age of six, he “fell in love at first sight”. Later, the “Virgin Mary took me under her wing”.

He says he gradually began to ask the Virgin Mary for help, “especially before the shows” when he apparently felt anxiety, and felt a response.

The irony is that Gad, raised in a traditional Jewish household, never realized he could have such a personal and loving relationship with the God of Judaism.

Moroccan Jews are known to respect Jewish tradition. Gad Elmaleh probably grew up in a home steeped in Jewish heritage. His attraction to Christianity is a shocking reminder that the lifespan of Judaism as a tradition pales in comparison to Judaism as a relationship with God.

The God of Judaism is formless but not abstract, transcendent but also immanent, cosmic but also personal.

In the ancient world, plagued by the worship of various powerful deities in their specific and personalized fields in a multitude of forms, Abraham, the first Jew, spoke of the existence of an almighty and formless God with whom he had a love relationship. , personal relationship. God called him “Abraham, who loves me”.

Judaism rejects not only the truth of any incarnation of God, but also its necessity. Yet human beings crave form. How can they have a relationship with a formless God?

The God that Judaism brought into the world cannot be seen, but can be heard. At Mount Sinai, God revealed himself through the spoken word. God presented himself to the entire Israelite nation in the Ten Commandments as the God who intervenes in history for their benefit.

It is not some distant divine power. He is a personal God who loves us and saves us, not only in mega events like the Exodus, but also in the daily challenges of our individual lives.

At the same time, God is transcendent, greater than the cosmos, beyond time and space, infinite. How can both be true?

Judaism has different names for God, referring to different aspects of the Infinite as revealed to human beings. Two names are used in each blessing, where God is addressed both as YHVH and as Elohim. YHVH represents God as transcendent, all-loving and all-merciful. Elohim represents God in nature, in the smallest details of life, behind both the unexpected check in the mail and the washing machine that breaks down. God has no concrete form, but He manifests Himself in our life in a concrete way. Recognizing the “hidden God” is the challenge of Jewish life.

Personal prayer means speaking to God in your own words, in your own language, expressing both your needs and your gratitude to the One who supplies those needs. Throughout Jewish history, Jews have had an intimate relationship with God through personal prayer. Moses, when his sister Miriam was stricken with leprosy, prayed, “Please God heal her. King David spontaneously poured out his heart to God in what became known as the Psalms of David. We read these psalms in a book, but David forged them from his heart.

Personal prayer means talking to God in your own words, in your own language, expressing both your needs and your gratitude.

However, after the destruction of the Temple, the sages composed fixed prayers to be recited three times a day. For most Jews thereafter, the formal prayers of siddur replaced personal prayer rather than increasing it.

This gave rise to the unfortunate phenomenon of “praying by heart,” in which Jews speak to God as if they were talking to an answering machine. The greatest sage of the 20e century, known as Chafetz Chaim, wrote:

It is not enough that [one] prays the Shemoneh Esrai prayer three times a day; several times a day, he must pour out his requests in solitude, in his house, from the depths of his heart. The three regular prayers are so routine that one does not really concentrate during them – which is not the case if everyone was contemplating his own fate in solitude…. So he poured out his heart like water to God.

A word of warning: God is not a fan of whining. So when you talk to God in personal prayer, start by thanking God for all you have before calling on Him for what you lack.

A person whose business is failing or who is facing a health crisis or whose love life is floundering or who is nervous before going on stage can speak to God, with faith that God has the ability to turn any situation around. The product of such openness is not always a miraculous rescue (though sometimes it is), but it is always the establishment of an intimate relationship with the God who loves you and does what is ultimately best for you. Without statues or images, a Jew can feel the loving presence of God in his life. 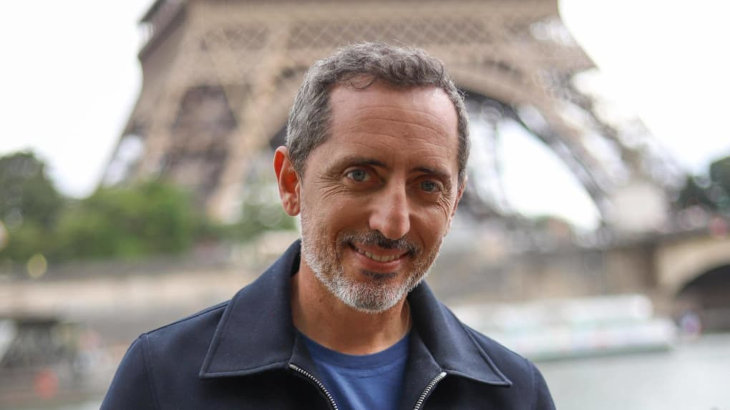 The TV interviewer asked Gad, “What’s Jewish about you?” One word.” Gad replied, “Spirit,” the spirit. Although often clouded by more mundane passions, the Jewish soul yearns for an intimate relationship with God.

The Divine is calling you, Gad, but you don’t need an intermediary. You can go straight.