LONDON (JTA) – Next weekend will mark the first Old Firm game of the Scottish football season – the nickname for the rivalry between Celtic and Rangers, two of the country’s most famous clubs, both based in Glasgow.

The teams play a few times a season, and at every game, even though only a few thousand Jews live in Glasgow, fans are likely to see Israeli and Palestinian flags flying in the stands.

Across Scotland, football and sociology have always been intertwined, and many Scottish teams have become repositories of conflicting identities, policies and histories. But the Israeli-Palestinian flag phenomenon, which began around 15 years ago, leaves Scottish Jewish supporters stuck in the middle of a political divide they would love to escape on the football pitch.

“We want this to stop,” said Paul Edlin of the Glasgow Jewish Representative Council. “Clubs don’t like it, but they won’t stop it from happening.”

Flags on the terraces of Rangers’ Ibrox stadium and Celtic Park are common sights, more so than in England, where the marriage between football and politics tends to be much weaker. At Celtic and Rangers, the Irish tricolors and British Union Jacks are so common that they are accepted and immediately recognized as substitutes for the clubs’ own banners.

“There is no reason to fly country flags at football matches for any reason – neither Israeli nor Palestinian,” Edlin added.

Several Scottish teams have historical ties to local Protestant and Catholic communities, a product of over a century of bigotry. Celtic, founded in 1887 by destitute Irish Catholic immigrants, has remained deeply attached to its Irish roots and its fans have historically been linked to political causes, protesting against anti-Catholic discrimination in Scotland and supporting Irish political autonomy.

Many Celtic fans feel a deep solidarity with causes across the Irish Sea and among some, particularly the few hundred members of vocal fan group Green Brigade, there is a perceived parallel between Irish nationalism and Palestinian liberation. . (Pro-Palestinian sentiment is widespread in wider Irish society and its government.)

A Palestinian flag seen among Irish flags during a game against Rangers in Glasgow in 2018. (Craig Williamson/SNS Group via Getty Images)

“There’s this group that has this narrative that Celtic is all about Irish republicanism and speaking for Celtic,” said Lord Ian Livingston, a Jewish member of the British parliament and former board member of the Celtic. “If you say you are on the side of the oppressed against the strong, anti-imperialist forces against imperialism, then that is an easy jump for them.”

In Glasgow, the Green Brigade has raised thousands of pounds for Palestinian charities and since 2019 has supported a football academy in the West Bank, called Aida Celtic, based in the Aida refugee camp near Bethlehem. Conservative Party member Livingston was considered a controversial leader among the team’s liberal fans, and he resigned from the team in 2017 in response to fan pressure.

When Celtic fans began to adopt Palestinian flags in the late 2000s, at Rangers’ Ibrox Stadium – where a portrait of the Queen gazes down at the players in the home team’s dressing room – the knee-jerk response from some fans was was to hoist Israeli flags among Union Jacks and Northern Irish crosses.

“It’s a small group, but I don’t like it. It makes me feel uncomfortable and it shouldn’t be there,” said Livingston, a Conservative Party member. “Israeli flags shouldn’t be at Ibrox either because it’s not about politics. The vast majority would say it has nothing to do with football.

There are around 30 Jews who regularly attend Celtic matches, and the growing visibility of the Green Brigade has drawn attention. UEFA, the Union of European Football Associations, has repeatedly fined the team for displays of the Palestinian flag.

The Jewish Representative Council complained to Celtic when the Green Brigade hoisted hundreds of Palestinian flags ahead of a special dispatch for Celtic legend Scott Brown in May 2021. Celtic called the display ‘unacceptable’ and withdrew the flags.

“It doesn’t make it easy for Jewish boys who support Celtic,” said Gerard Minster, 52, a die-hard Celtic fan who is Jewish. “Whenever there is unrest in Israel and Palestine, they seem to raise their heads. It can be difficult, but that’s part of it, and it doesn’t discourage me from supporting Celtic. 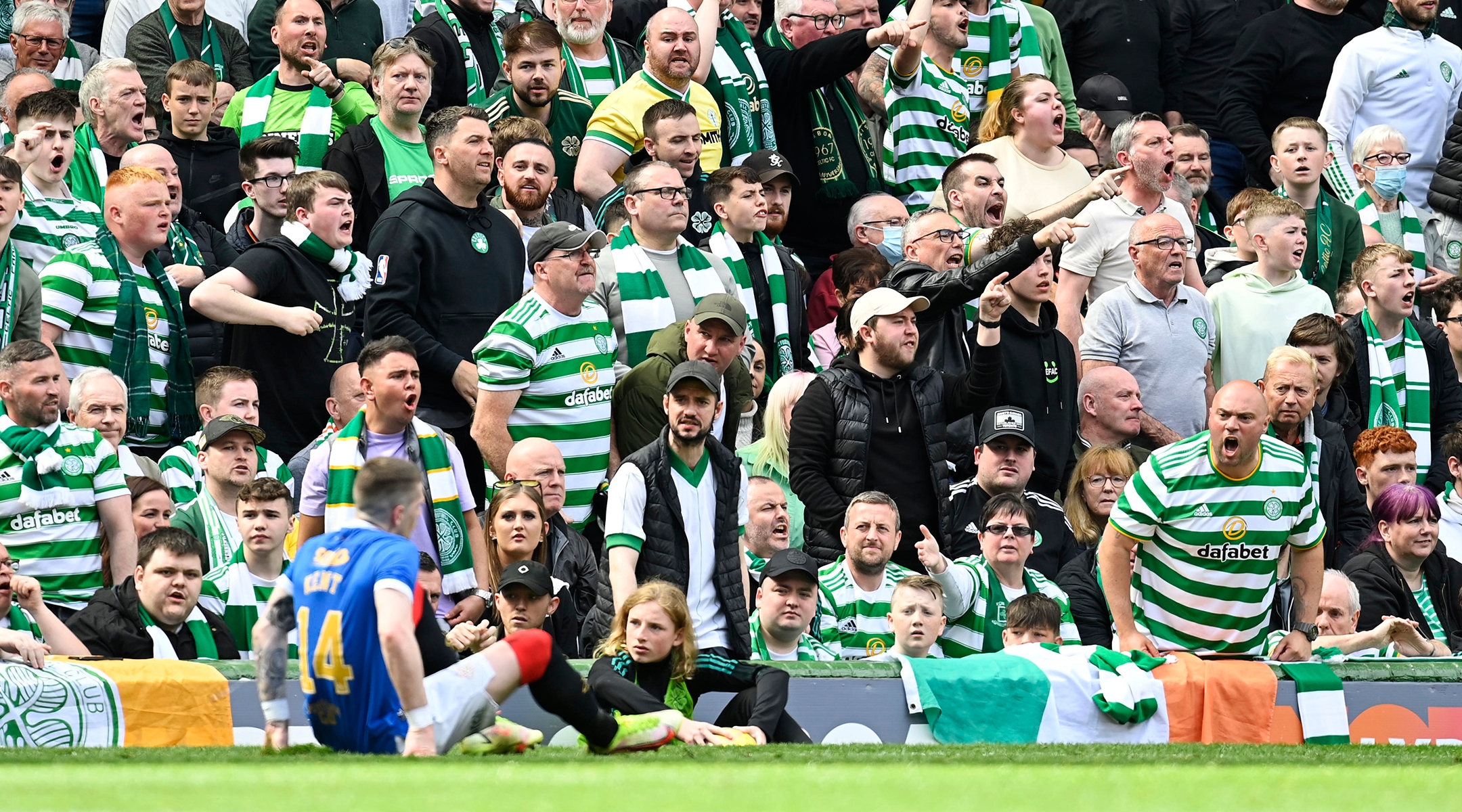 The emergence of the flags as a proxy for the Celtic-Rangers rivalry is less about the details of Israeli and Palestinian politics than a reflection of much deeper sectarian issues in Scotland. Both Celtic and Rangers have had Israeli players, many of whom are highly regarded – Nir Bitton, for example, ended a nine-year spell at Celtic Park to a standing ovation from 60,000 Celtic fans in May. (Another Israeli player, Liel Abada, remains on Celtic’s roster.)

While the Catholic and Protestant divide has largely disappeared in England, it has survived as an undercurrent in Scotland, and many believe football rivalries have helped keep it going.

“It’s still massive,” said David Kaplan, a Jewish supporter of Heart of Midlothian, an Edinburgh club historically associated with the Protestant population. “Every club in Scotland has a religious affiliation in Scotland. Even if they don’t admit it, they all do.

This has made Scotland’s roughly 5,000 Jews an oddity on the Scottish football landscape. Freed from the religious and cultural baggage of their Christian peers, many Jews can more freely choose the teams they want to root for.

“Jews felt caught in the middle,” said Harvey Kaplan of the Scottish Jewish Archives Center in Glasgow. “Jews also probably had less to worry about because…Protestants and Catholics were more likely to fight.

Historically, most Jews supported Rangers and Hearts (short for Heart of Midlothian). When Jews arrived as immigrants from Eastern Europe in the late 19th and early 20th centuries, their children mostly adopted the teams of their friends and classmates. Most of them sent their children to Protestant schools, Kaplan explained, because they were more open to a range of students, unlike Catholic schools, which focused on Catholic students. 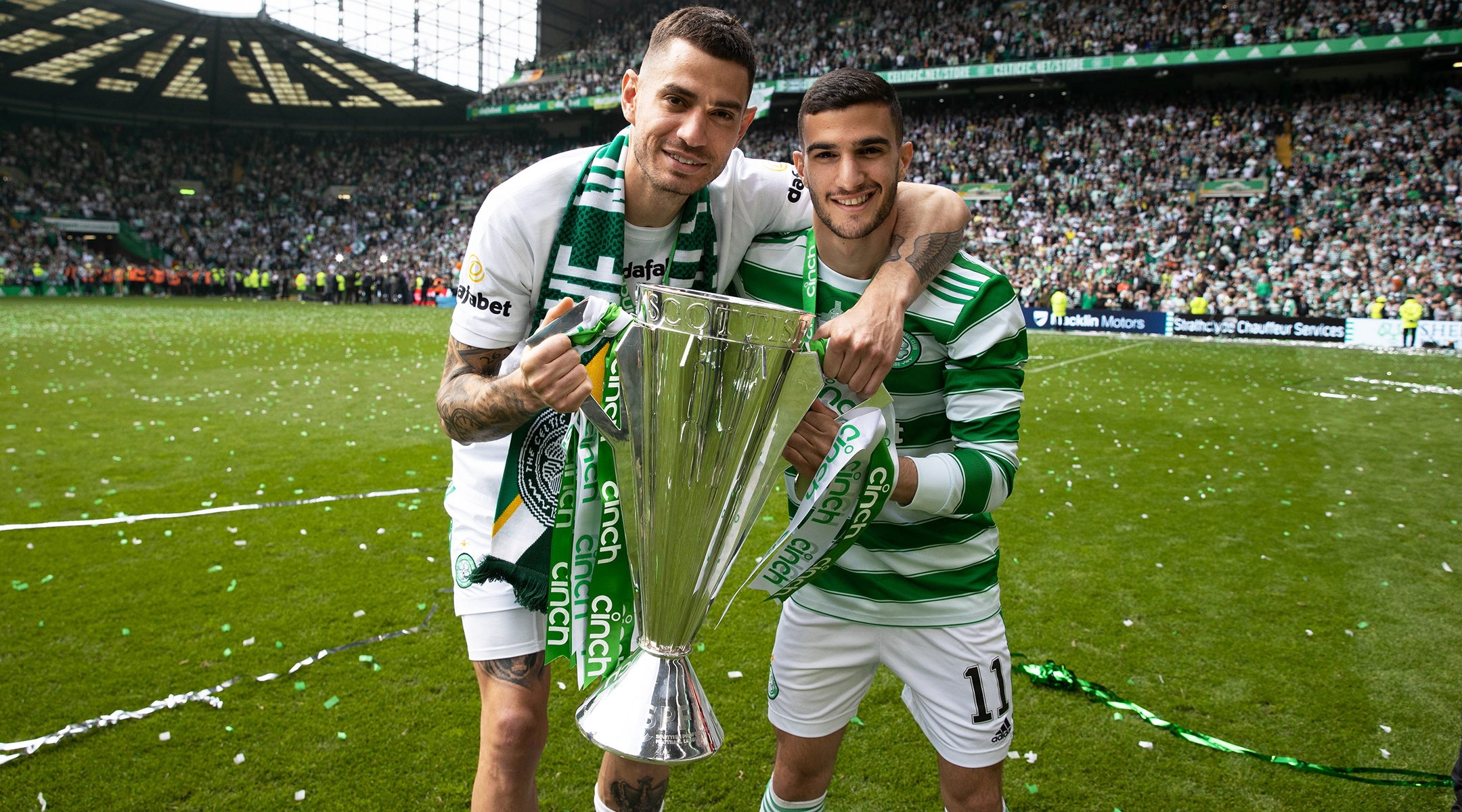 Celtic’s two Israeli players at the time – Nir Bitton, left, and Liel Abada – hold the Scottish Premiership Trophy after a match between Celtic and Motherwell at Celtic Park in Glasgow on May 14, 2022. (Craig Williamson/SNS Group via Getty Images)

“That would mean you would probably be a Rangers fan,” he said.

There is also, however, a significant group of Jews who began following Celtic in the late 1960s when Third Lanark, a south Glasgow side with a large Jewish following, went bankrupt. At the time, Celtic were at their peak, winning nine consecutive league titles and the European Cup in 1967 – so Third Lanark fans jumped on the bandwagon.

Had Third Lanark survived, they could have become a team renowned for their Jewish support, much like Tottenham in England. In the 1920s and 1930s, Third Lanark, located near a Jewish quarter, even fielded one of Scotland’s very few Jewish professional footballers, Sam Latter. As late as 1960, the Jewish Chronicle reported that a quarter of the 6,000 people at Third Lanark Stadium were Jews.

In England, the Jewish footprint on the ground tended to be minimal, and in Scotland it was even smaller. Although there is occasional discussion of potential promising Jewish players discovered by Celtic and Rangers fans on the forums, many are Irish or Scottish players who have vaguely Jewish-sounding surnames. (A notable Jewish player in Scottish history was the almost forgotten Lanarkshire-born Joe Abraham, who probably became the first Jew to play top-level professional football in Britain when he made his debut for the Glasgow club Partick Thistle in 1897.) Israeli players came to ply their trade in England and Scotland, and Celtic – emerging from a decade of dominance – were an attractive lure.

Ultimately, however, Scotland’s Jewish community is shrinking – from around 20,000 in the early 1960s to perhaps even fewer than 5,000 today – and there may not be ” a next generation “of players and fans” to worry about,” Minster said.

The issues that plague Scotland’s aging Jewish core – that its youth pour into Britain’s Jewish capitals London and Manchester in search of opportunity don’t return – are common in Britain’s small Jewish communities.

“What comes next will not be relevant because the Jewish community is so small,” the minister said. “I can name probably 20 or 30 Jewish season ticket holders at Hearts today – only one of them lives in Edinburgh.”